A Whole Day To Discover Pisa
Based on article by Chiara Ricci from www.discovertuscany.com (link)

Pisa has gained international acclaim mainly thanks to its Leaning Tower, but believe me that there are many other reasons for visiting this wonderful city (don’t ask however an inhabitant of Lucca or Livorno: the historical rivality between Lucca, Livorno and Pisa is still alive, just consider this saying as a confirmation: Better a dead person in your house than a Pisan at your door!!).

As ever, I strongly suggest you prefer public transports for getting to Pisa: it’s well connected to all main Tuscan destinations by train, the easiest, fastest and cheapest way to get there. If you leave from a close location, such as Lucca for example, you could also choose the bus, which will offer a more panoramic trip with no doubt, but if you have just one day at your disposal for visiting Pisa and its attractions, you’d better choose the train. Driving till Pisa is another possibility obviously, but car parking and traffic are the classic problems you may find in a big city like this.

That said, the itinerary I’m going to propose you is a completely walking tour leaving from the train station square (if you’ve followed my previous advice, you won’t have any problem to find this place: trains and most of the buses arrive there). To all those who have decided to spend the night before in Pisa: If you’ve decide to lodge in the old city center, the easiest way to get to the train square is by foot, if you have instead found an accommodation in the surroundings, just take a local bus, there are many arriving at the train square or closeby.

Outside the station, the first thing you see is Piazza Vittorio Emanuele, the administrative core of the city: this is an amphitheatre-shaped square - surrounded by a circular walkable open gallery full of shops - where several historical buildings look onto. We leave the square to walk through Corso Italia, the most important and renowned street of Pisa, a paradise for shopping lovers!

Going forward and leaving behind Piazza del Carmine and Piazza della Pera, we get to the famous Logge dei Banchi, just in front of Ponte di Mezzo on the Arno river (where the traditional Battle of the Bridge is usually celebrated), a characteristic and impressive loggia built according to the Buontalenti project at the beginning of the XVIIth century, aimed to house the silk and wool market (from there - from the word stand to be more precise - comes the name Loggia dei Banchi).

We continue our walk to Lungarno Galilei: Lungarni - those roads that run along the Arno river - are very important and renowned for both inhabitants and tourists: rich in bar and restaurants, they are popular meeting places for all Pisa inhabitants, while tourists who want to enjoy a nice walk and admire the architectural and historical treasures of the city, choose the Lungarni for catching Pisa essence.

Before leaving the Lungarno Galilei, I would like you to focus your attention on the particular San Sepolcro church, an octagonal building aimed to be a refuge, a hospital and a monastery, dedicated then to the Knight Templars.

Along the other side of the Arno, instead, runs the Lungarno Mediceo, the most known for the Medici Palace, usually known as Palazzo Vecchio (there both Cosimo Il Vecchio and Lorenzo Il Magnifico lived) and for San Matteo Church and National Museum, home to some important works of art by internationally renowned Italian artists. 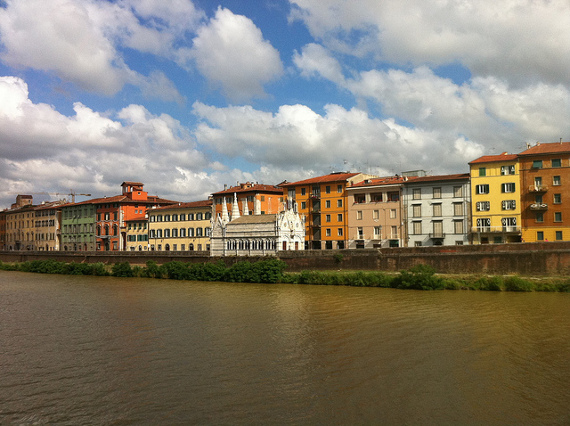 A few steps from there we’ll find the characteristic Borgo Stretto, a tiny medieval road surrounded by loggias and open galleries with small shops and stores that always catch the attention of people for being like a step back in time!

Situated at a very short distance, Piazza dei Cavalieri is another place you shouldn't miss out: it’s not a big square, on the contrary: it’s a small place, always crowded with people and students running from a place to another or chatting somewhere; it’s home to the prestigious university Scuola Normale di Pisa and to the Clock Palace. This palace is characterised by two towers, one of which - the Hunger Tower - has been mentioned by Dante Alighieri in its Divine Commedy, gaining then international claim: Count Ugolino della Gherardesca - lived during the Middle Age - together with his sons and grandchildren, was imprisoned there and left starving to death. 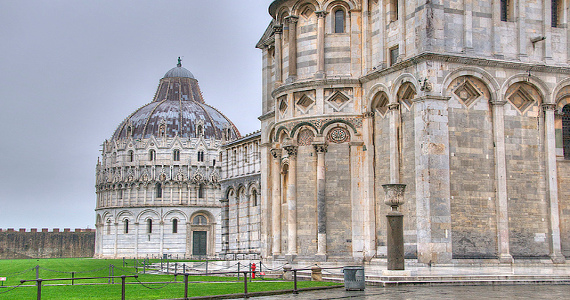 Another 10 minutes walking and we get to Piazza dei Miracoli - Miracles Square, passing through via Santa Maria, home to two of the most important universities of Pisa: the Faculty of Foreign Language and Literature and the School of Translation and Interpreting. As we get closer to the square, it’s possible to catch the sight of this marvellous place with its Leaning Tower and the other beautiful buildings: the Baptistery, the Cathedral and the Monumental Cemetery (representing life cycle).

The Cathedral is a wonderful example of Roman in Pisa style whose white-and-grey marble façade has been decorated with polychrome marbles, creating a very suggestive impression; on the contrary, interiors have been realized with white-and-black marbles. The bell tower, about 50 meters high, is known worldwide for its unintended tilt to one side, due to the ground being too soft and thus inadequate to support the tower structure since its early construction steps.

When I come there, I love standing in front of the tower and think how this square would be if the tower construction wouldn't have found such problems: I wonder what the stands - that completely surround the square - would sell instead of the little leaning tower statues and if this place would have been as famous as it actually is or, instead, would have been an exclusive place for art passionate and connoisseures...Who knows… The tower has been recently reopened to the public - entrance had been forbidden during restoration works - so you may get on the bell tower and looking out one of its windows.

Would you ever said that the Baptistery and the Gothic Cemetery are the most visited destination of Italian high school students each year exactly 100 days before the beginning of exams? Well, there’s a good luck ritual consisting of going around the Baptistery as much times as the mark you would like to get on the graduation exam...and a good reason for skipping school!

Located at only 3 minutes walking distance from the Miracles Square there is the Orto Botanico - Botanical Garden of Pisa - a destination that brings a bit of nature in this artistic itinerary of Pisa that you shouldn’t miss out! Entrance to the garden is very cheap: adults fee is 2.50 euros, there are also reduced entrances - 6.00 euros - for family with children.

Instead of going back to the main train station where we’ve started our itinerary, you could save time and give a break to your tired feet! You are at just a few stones from the other rail station, Pisa San Rossore, where you could take the train to Lucca and Florence or to Pisa Centrale to change train should you need to go elsewhere. If you decide to treat yourself to a last little break before going back home, take the chance to try one of the delicious restaurants in the old city center or along the Lungarni: there are many at reasonable prices serving typical traditional dishes you should absolutely taste!

That said, there’s nothing left for me to say but leave you to the discovery of this old and enchanting Maritime Republic.