San Gimignano
Based on article by Cristina Romeo from www.discovertuscany.com (link)

San Gimignano, a small walled village about halfway between Florence and Siena, is famous for its medieval architecture and towers that rise above of all the surrounding buildings offering an impressive view of the city from the surrounding valley.

At the height of its glory, San Gimignano's patrician families had built around 72 tower-houses as symbols of their wealth and power. Although only 14 have survived, San Gimignano still retains its feudal atmosphere and appearance.

Recognized as a UNESCO World Heritage Site since 1990, San Gimignano offers visitors the chance to step back in time while enjoying its local products including saffron and its white wine, the Vernaccia di San Gimignano. 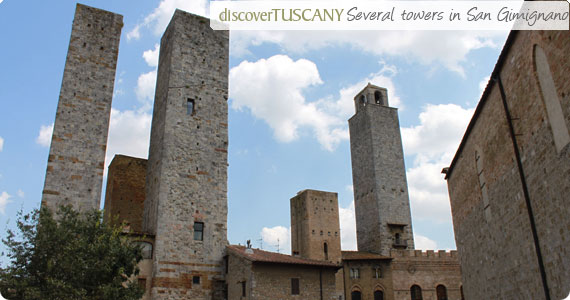 San Gimignano through the Ages

The city was built atop a hill about 300 meters high and thus enjoys a wonderful view of the entire Elsa Valley that surrounds it. The hill has been inhabited since the Etruscan and Hellenistic period, probably due to is dominant position that allowed a careful watch of the valley below.

Historical records going back to the 10th century mention that the city is named in honor of Saint Geminianus, a bishop from Modena from the 4th century who is said to have saved the city from the invading Huns.

San Gimignano had its most thriving period in Medieval times, due to the fact that it sat along the Via Francigena, an important road and pilgrimage route of the time connecting Rome to Canterbury. The town was a central reference point for many merchants, travelers and, above all, the many faithful that set out on a pilgrimage to Rome and that neededhospitalityand often also requiredassistance.

San Gimignano became a free commune at the end of 1100. The city then became embroiled in the conflict between Guelphs and Ghibellines, inevitable given its central position in regards to the two great rivals, Florence and Siena (the first sided with the Guelphs, the second with the Ghibellines). Despite the struggles, San Gigimignano managed to continue its economic development, particularly in the commerce of local agricultural products such as saffron and wine. The 12th century turned out to be its period of highest splendor. The city was notably richer and comissioned various public works.

In this period, the city had over seventy towers, homes which were built by the many wealthy families in the town as a way to show off their wealth and power. The striking fourteen towers of various heights which have withstood wars and time continue to define the city making its unique skyline its international symbol.

San Gimignano was governed by Ghibellines up until 1255, year in which the Guelphs took over and in which the original city walls were torn down. Once they triumphed in famous Battle of Montaperti of 1260, the Ghibellines returned to control the city, rebuilding and enlarging the city walls.

In 1300, San Gimignano hosted Dante Alighieri in his role as ambassador for the Guelph League. In the middle of the century, San Gimignano was unfortunately hit by the plague and was unable to avoid falling under Florence's power. The city then began a slow political and economic decline, although it managed to continue flourishing artistically and culturally during the following centuries. Among the most important are the Renaissance frescoes by Domenico Ghirlandaio in the Santa Fina Chapel, located within theCollegiata, the main church in  San Gimignano (once its cathedral).

Despite the passing of the centuries, San Gimignano managed to preserve its Medieval architecture and its charm and today is with a doubt one of Tuscany's greatest small treasures. The "city of the beautiful towers", as it is often called, has been a recognized UNESCO World Heritage Site since 1990.